A fired 50 BMG at BC Firearms Academy in Vancouver.  The .50 Browning Machine Gun (.50 BMG, 12.7×99mm NATO and designated as the 50 Browning by the C.I.P.[1]) is a cartridge developed for the Browning .50 caliber machine gun in the late 1910s. Entering service officially in 1921, the round is based on a greatly scaled-up .30-06 cartridge. Under STANAG 4383, it is a standard cartridge for NATO forces as well as many non-NATO countries. The cartridge itself has been made in many variants: multiple generations of a regular ball, tracer, armor-piercing (AP), incendiary, and saboted sub-caliber rounds. The rounds intended for machine guns are linked using metallic links.
The .50 BMG cartridge is also used in long-range target and anti-materiel rifles, as well as other .50-caliber machine guns.
A wide variety of ammunition is available, and the availability of match grade ammunition has increased the usefulness of .50 caliber rifles by allowing more accurate fire than lower quality rounds. 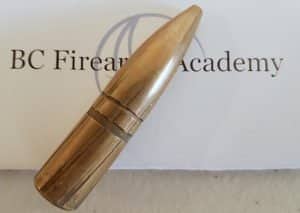 Fired 50 BMG at BC Firearms Academy in Vancouver

A fired 50 BMG at BC Firearms Academy in Vancouver.  Military cartridge types:

RSO (Range Safety Officer) Course for Club Shoots and Open Range Events. This course has been focused to meet the needs of Candian gun clubs and ranges but is applicable to a wide variety of facilities worldwide.

This is a free online course to help you prepare for your Use Of Force course and rewarding career in the Armoured Car Industry.

In Class (not online) Courses Offered By BC Firearms Academy

Personal Coaching &amp; One on One Instruction

Personal Coaching, One on One Instruction &amp; Range Training. Accelerate what you’re out to accomplish. Address what matters most to your shooting goals.

Quick Links for Your Convenience

Can You Still Name These Bullets?

Can anyone guess what caused the damage to this barrel?

PAL and Hunting In-Person Courses Are Back