Start Studying Free Online For Your BC

Accompany – means to remain in the company of the other person, able to see the other person without the aid of any device other than ordinary corrective lenses and able to communicate by unamplified voice with that person. 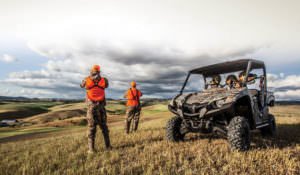 All-Terrain Vehicle (ATV) – means a wheeled vehicle or tracked vehicle propelled by motorized power, and capable of travel on or off a highway, including motorcycles but not including a snowmobile or motor vehicle that is licensed for highway travel under the Motor Vehicle Act.

Antlered Animal – means a member of the deer family over one year of age bearing visible bony antlers.

Antlerless Animal – means a member of the deer family bearing no visible antlers. The small skin or hair covered protuberances of male fawns and calves do not constitute antlers. Arrow – means a slender shaft, which may be pointed at one end and maybe feathered at the opposite end, for shooting from a bow.

Bait – means anything, including meat, cereals, cultivated crops, restrained animal or any manufactured product or material, that may attract wildlife and includes plastic or other imitation foods, but does not include a decoy as described under these regulations. 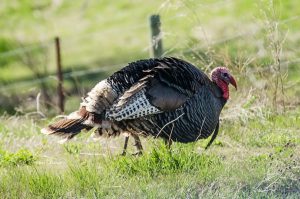 Bearded Turkey – a turkey with a tuft of hair-like feathers on the chest that grow larger with age.

Bolt – means a shaft or missile designed to be shot from a crossbow or catapult. Bow – means a longbow or crossbow.

Brow Tine – means the first tine projecting forward or upward in the lower 1/3 of the antler of a moose, caribou, elk or deer.

Calf – means a moose, elk or caribou less than twelve (12) months of age. 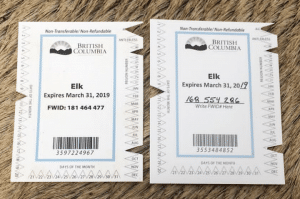 Caribou – 5 Point Bull – has one antler which bears at least 5 tines (points), including the tip of the main beam above the rear point. If the rear point is missing, the first rear-facing point will be used as the rear point.

Compound Crossbow – means a crossbow on which the bowstring runs through pulleys. Cougar Kitten – means any cougar with spots or any cougar under one year of age.

Crossbow – means a bow fixed across a stock with a groove for the arrow or bolt and a mechanism for holding and releasing the string. (NOTE: The use of crossbows is permitted during special bow only seasons.)

Decoy – means any material or manufactured product that simulates the appearance or has the form of wildlife. Deer Family – means moose, caribou, deer and elk. Edible

Elk – Six Points or Greater Bull – means any bull having at least six tines on one antler.

Elk – Spike Bull – means a bull elk having antlers that are composed of a main beam from which there are no bony projections more than 2.5 cm in length.

Elk – Three Points or Greater Bull – means any bull having at least three tines on one antler. 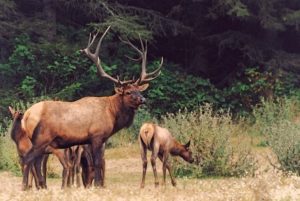 Existing road or trail – means a) a road or trail with a paved surface, b) a cross-country or downhill ski route marked in a ski area by the owner of the ski area, c) a road used for logging or mining, d) a road or trail used for access to fences, power lines, wind generators or communication towers, or e) a trail on which there is no vegetation except on a strip that, if present, can be straddled by a 4-wheel vehicle.

Feral pig – means a pig of the genus Sus that is not in captivity or is not otherwise under a person’s control.

Firearm – includes a device that propels a projectile utilizing an explosion, compressed gas or spring and includes a rifle, shotgun, handgun, pellet gun, “BB” gun or spring gun but does not include a bow.

Gallinaceous – means a bird of heavy-bodied largely terrestrial birds including the pheasants, turkeys, grouse, and the common domestic chicken.

Handgun – is a firearm that is designed, altered or intended to be aimed and fired by the action of one hand or that has a barrel less than 305 mm (12 in.) in length.

Hunt & Hunting – includes shooting at, attracting, searching for, chasing, pursuing, following after or on the trail of, stalking, or lying in wait for wildlife or attempting to do any of those things, whether or not the wildlife is then or subsequently wounded, killed or captured: (a) with the intention to capture the wildlife, or (b)while in possession of a firearm or other weapon.

Licence Year – Hunting and Guide Licences – means the period from April 1 to March 31 of the following year.

Trapping and Fur Trading Licences – means the period from July 1 to June 30 of the following year.

Migratory Game Birds – for which there may be an open season in B.C. and for which a Canadian Migratory Game Bird hunting permit is required are: waterfowl (ducks and geese, including Brant); American Coot; Common Snipe; Band-tailed Pigeon and Mourning Dove.

Moose – Spike-fork Bull – means a bull moose having no more than two tines on one antler. (Includes tines on main antler and brow palms.) Does not include a calf. 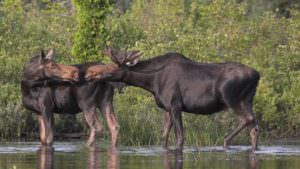 Moose – 10 Point Bull – means a bull moose having at least one antler with a minimum of ten points (tines), including the tines on the brow palm. (See diagram and tine definition.)

Moose – Tri palm Bull – means a bull moose having at least one antler with a brow palm bearing three or more points (tines). The brow palm is separated from the main palm by the deepest antler bay. The deepest bay is the bay whose vertex (deepest location) is the shortest distance from the antler base, when measured along the surface of the antler.

Motorcycle – means a motor vehicle that runs on 2 or 3 wheels and has a saddle or seat for the driver to sit astride. 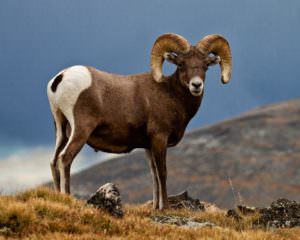 Mountain Sheep – Mature Bighorn Ram – means any bighorn ram mountain sheep whose horn tip, when viewed squarely from the side at right angles to the sagittal plane of the skull, extends dorsally beyond the nose bridge plane

Mountain Sheep – Full Curl Thinhorn Ram – means any thinhorn ram mountain sheep that has attained the age of 8 years as evidenced by true horn annuli as determined by the regional manager or his designate, or whose horn tip, when viewed squarely from the side at right angles to the sagittal plane of the skull, extends dorsally beyond the nose bridge plane. Do not use yearly horn growth annuli to determine the age of a ram in the field, because “false” annuli may be present.

Mule (Black-tailed) Deer – Four Points or Greater Buck – means any buck having at least four tines, excluding the brow tine, on one antler. No Hunting Area – means a designated area in which hunting (see definition) is prohibited.

Non-Resident Alien – means a person who is neither a B.C. resident nor a non-resident.

Non-resident/alien Restricted Licence – means a licence issued to a non-resident or a non-resident alien who has not successfully completed examinations, approved by the director, about conservation, outdoor recreation and safety.

Non-resident/alien Unrestricted Licence – means a licence issued to a non-resident or a non-resident alien who has successfully completed examinations, approved by the director, about conservation, outdoor recreation and safety.

Non-Toxic Shot – means shotgun pellets consisting of, by weight, not more than one per cent lead.

No Shooting Area – means a designated area in which the discharge of firearms is prohibited.

Power Boat – means a boat, canoe or yacht powered by electric, gasoline, oil, steam or other mechanical means, but does not include a boat powered manually nor a boat with an outboard motor provided the motor is tilted or otherwise disengaged so as not to be ready for immediate use. 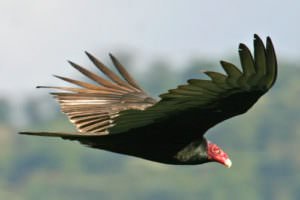 Protected species and Raptors are non-game

Raptor – means birds of the order Falconiformes (falcons), Accipitriformes (vultures, eagles, and hawks), or Strigiformes (owls) and includes the eggs of these birds.

Snowmobile – means a vehicle designed primarily for travel on snow or ice, having one or more steering skis, self-propelled and using one or more endless belts or tracks are driven in contact with the ground.

Spike Buck – means a male deer having antlers that are composed of the main beam from which there are no bony projections greater than 2.5 cm in length.

Traffic or Trafficking – means to buy, sell, trade or distribute for gain or consideration or to offer to do so.

Vehicle – means a wheeled or tracked device in, on or by which a person or thing is or may be transported or drawn on a highway.

RSO (Range Safety Officer) Course for Club Shoots and Open Range Events. This course has been focused to meet the needs of Candian gun clubs and ranges but is applicable to a wide variety of facilities worldwide.

This is a free online course to help you prepare for your Use Of Force course and rewarding career in the Armoured Car Industry.

In Class (not online) Courses Offered By BC Firearms Academy

Personal Coaching &amp; One on One Instruction

Personal Coaching, One on One Instruction &amp; Range Training. Accelerate what you’re out to accomplish. Address what matters most to your shooting goals.

Quick Links for Your Convenience

April Courses with BC Firearms Academy

Discounts on CORE Hunter Challenge Exams for February! Only $25

What are the steps to getting my FWID once I have completed my CORE? 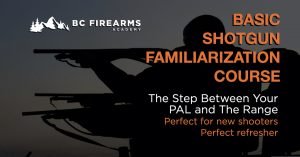