This Armoured Car Use of Force Course required to obtain your Authorization to Carry (ATC) to work in the armoured car industry.

BC’s most experienced independent Armoured Car Use of Force Instructors will provide the UoF training that will help your business provide the safest possible environment for your employees and customers.  BC Firearms Academy instructors have years of experience working in the Armoured Car industry. Our Justice Institute of BC ( JIBC ) certified instructors have industry experiences and have worked directly with Canada’s leading providers of armed guards.

Participants must be referred for Use of Force training by their employer or intended employer. 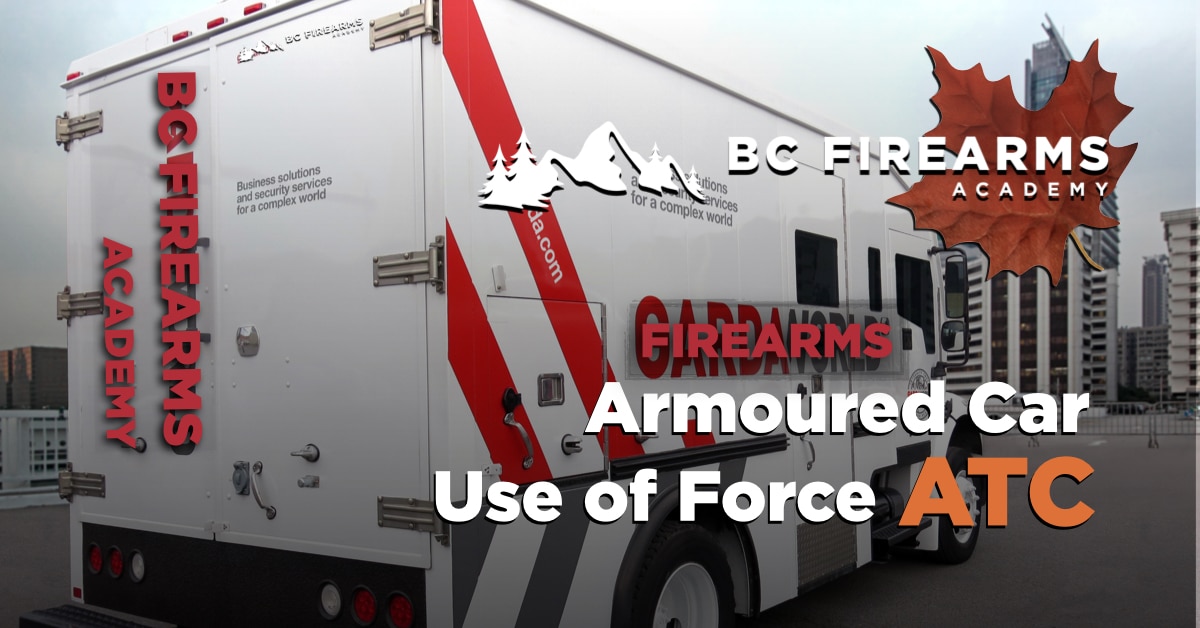 Use of Force Armoured Car Training BC

ATC Use of Fore Certification for a revolver or semi Automatic

The Canadian Firearms Program, Department of Justice, in cooperation with the Chief Firearms Officers, developed the “Authorization to Carry – Guidelines on Use of Force and Firearm Proficiency”. The primary objective of these Guidelines is to ensure the safety of both the public and the individuals authorized to carry firearms as part of their employment.

To be admitted to the training, you must:

1. Possess a valid Possession and Acquisition Licence (PAL) to the restricted firearms level.

2. Paragraph 3(a) of the Authorizations to Carry Restricted Firearms and Certain Handguns Regulations provides that:
3. For the purpose of section 20 of the Act, the circumstances in which an individual needs restricted firearms or prohibited handguns for use in connection with his or her lawful profession or occupation are where (a) the individual’s principal activity is the handling, transportation or protection of cash, negotiable instruments or other goods of substantial value, and firearms are required for the purpose of protecting his or her life or the lives of other individuals in the course of that handling, transportation or protection activity;

You will be evaluated and assessed in each component of the Guidelines, namely legal issues, firearms proficiency and use of force tactics. Throughout the training, you will participate in:

use of force training; and

firearms training.
Mandatory attendance at all sessions is required. Observations of inappropriate activity and/or violations of safety are subject to immediate removal.

To successfully complete the training, you will have to meet the following criteria:

participation in all discussions and activities; and

Use of Judgement Standard (pass/fail)

The following topics are mandated in the course:

the law on firearms;

the law on use of force;

the Use of Force Model;

Generally, individuals who are engaged in security work, or carrying on a security business, are prohibited from carrying firearms. However, because of the nature of their work, the registrar permits armoured car guards to carry firearms so long as a number of requirements are met. Qualifications for armoured car guard licence applicants were outlined in policy 2.5.2.1. This section outlines:

• the application requirements relating to firearms that are specific to armoured car guard licence applicants, and

• the licence conditions relating to firearms that apply to all armoured car guard security workers and business licences.

Rationale In order to issue an armoured car guard security worker licence, the registrar must be satisfied that the applicant holds all licences and permits required by law in relation to an approved type of firearm. Firearms are regulated federally under the Firearms Act of Canada (Firearms Act) and its regulations. In order to carry a firearm while working as an armoured car guard, an individual must have an Authorization to Carry (ATC) issued pursuant to section 20 (b) of that Act.

3.4.2.2 The licensee must only carry a firearm if the licensee holds a valid ATC issued under section 20 (b) of the Firearms Act, by the CFO BC and follows all the conditions of the ATC.

3.4.2.3 The licensee must only carry a firearm that is registered to the business licence holder’s firearms business inventory and where, pursuant to the Firearms Act, a firearm registration number has been issued.

3.4.2.4 The licensee must carry the approved firearm only while on duty, in uniform with the firearm prominently displayed and contained in a minimum level III security holster on a pistol belt. (This condition does not apply to the licensee when engaged in firearms training and target practice on an approved firing range or for ordinary firearms maintenance in accordance with company policy.)

3.4.2.5 The firearm must be securely stored at the licensed business address during off-duty hours.

3.4.2.6 The licensee must only carry the following approved types of firearms as specified:

(a) Revolvers: – all-steel, double action, six shot revolvers with a safety hammer block and swing out cylinder, and classified as;

(i) restricted firearm defined by section 84(1) Criminal Code of Canada (CCC) “a handgun that is not a prohibited firearm” (with a barrel length of not less than 106 mm and not more than 127 mm, or

– carry ammunition only of the calibre .38/.357 special, factory loaded +P hollow point (controlled expansion) ammunition composed of either copper-jacketed or all lead alloy,

– to carry on duty, a maximum of 18 cartridges only (six in the revolver and two additional speed loaders on the pistol belt), and

(b) Semi-automatic pistols: – classified as restricted firearm defined in part by section 84 (1) CCC “means a handgun that is not a prohibited firearm”

– with a double action trigger mechanism,

– only 12 gauge “pump action” shotguns capable of holding not more than eight shells and that are commonly known as “non-restricted” firearms (specifically not falling under the CCC definition of a restricted or prohibited firearm) are authorized for use by armoured car guard workers, and

– only 12 gauge shotgun shells commonly known as SSG/00 Buck and containing no less than nine shot pellets per shell are authorized. The use of shotgun “slugs” or any other projectiles other than shot pellets are not authorized.

3.4.3.1 A person applying for an armoured car guard security business licence must submit: (a) a copy of a valid Firearms Business Licence issued in the business’s name by the CFO BC, and (b) a complete list of all registered firearms held by the business.

3.4.4.2 The licensee must only carry on the security business so long as the licensee holds a copy of a valid Firearms Business Licence issued in the business’s name by the CFO BC.

3.4.4.3 The licensee must ensure that its armoured car guard workers only carry a firearm if the worker holds a valid ATC issued by the CFO BC and follows all the conditions of the ATC.

3.4.4.4 The licensee must ensure that its armoured car guard workers only carry firearms that are registered to the security business under the Firearms Act.

3.4.4.5 The licensee must ensure that its armoured car guard workers only carry the firearms approved under 3.4.2.6.

3.4.4.6 The licensee must ensure that its armoured car guard workers, who carry firearms, only carry the ammunition approved under 3.4.2.6.

PAL/RPAL is the license for both non-restricted and restricted firearms and requires completion of the 2-day Canadian Restricted Firearms Safety Course (CRFSC). This course costs $220.